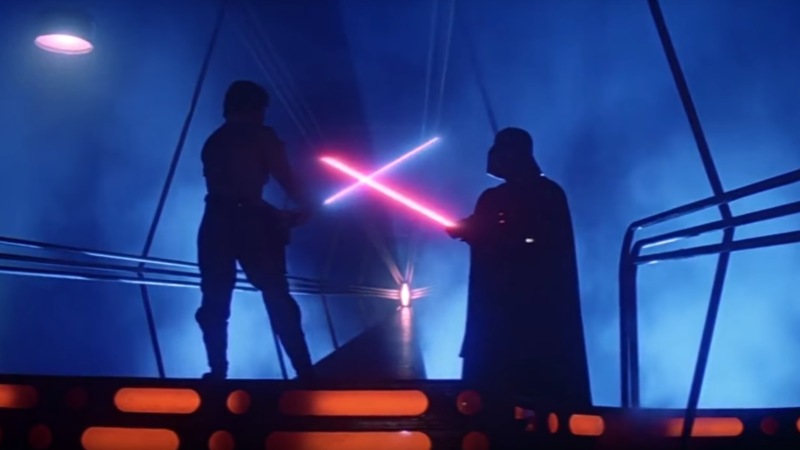 We are going to briefly dig deep concerning this epic scene in movie history.

The reason why so many today are fickle, moving quickly from one fixation to the next without any real satisfaction, is because they themselves cannot find the deeper meaning of acceptance. The Father alone provides this.

Luke Skywalker is a character desperately seeking the father figure. The lighted suns, for example, with one lighter/younger and the other darker/older, is a visual depiction of the longing for deep companionship between father and son. Keep in mind the lights are shown right after being reprimanded for showing this longing.

Luke is basically another name for Lucas (Luqas, Loukas), which means Light Giver. George Lucas was very fascinated with light reflection in his early works, which eventually led to his success in film. LUH, a character in THX-1138, reflected a deep relational need within a dystopian future. This act eventually brought awareness to the THX character.

As most are aware, Luke Skywalker’s name was originally Luke Starkiller. Stars in scripture are a direct reference to angels and spiritual principalities, which can be clarified at the beginning words of Revelation. Judges 5, for instance, states that the stars from heaven fought from their courses. Luke is a slayer of angels, and is himself angelic. Pay close attention when Luke loses his focus due to pride for his abilities. Quickly he is dropped from the stairs of elevation to be stomped down by the Dark Lord. Just as a third of the stars which fell from heaven.

Darth Vader, on the other hand, is the Dark Father who has quenched the true, yet forgotten Father.

Isaiah 14 states, “For you have said in your heart, I will ascend into heaven; I will exalt my throne above the stars of Yah; I will sit also upon the mount of the congregation, in the sides of the north; I will ascend above the heights of the clouds; I will be like the most High.” With this motive reviled, it is declared that “He shall be brought down to hell, to the sides of the pit.” Vader ascends further into darkness by hunting down the Jedi, and although he attempts to ascend within the city of the clouds (altering its deed), his self-induced pain takes him back to the lava pit of his initial scaring.

As Cloud City is a place of merchandise, Vader attempts to buy Luke’s favor with violence.

“By the multitude of thy merchandise they have filled the midst of thee with violence,” speaks Ezekiel, “and thou hast sinned: therefore I will cast thee as profane out of the mountain of Yah: and I will destroy thee, O covering cherub, from the midst of the stones of fire.”

Although precious stones were once his covering (living stones in scripture refer to a special people), Vader is now tainted with the role of the golem. A golem (in Jewish legend) is a demonic mud-like creature manipulated by an enlightened human. Activation letters were placed on the creature, which, once removed, would render it useless. We can see this with Vader’s priest-like breastplate and garments, representing the Emperor’s hold.

There are also the lightsabres. Each wielder holds a spiritual powered flame… shepherds fighting over the flock with their rods. Whose tapping will turn the tide? The one to rule by strength, or the other to lead by service? We go further into this in the video series.

The carbonite chamber itself has its own interpretation. Wrote a lecture years ago called Frozen In Carbonite. “Stuck in the past,” it says, “carbonite seals us from the outside world…as well as protects us. […] It seems that we are the product.” Vader desires to seal Luke as a possessed prize, similar to how he wanted to preserve Padme from death. This chamber, as in scripture, acts as hiding place of conflict. Although, as Yahshua states, “Behold, he is in the secret chambers, believe it not.”

This conflict resides in inner soul of fallen man. We must not sway to the darkness that has crept within us, yet stand strong to the ways of righteousness. It is better to let go of the self than to succumb.