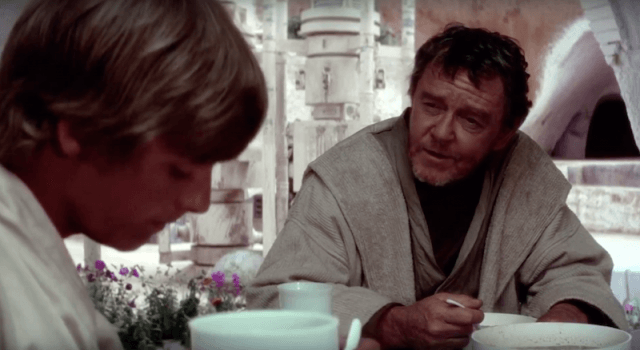 Today, am reminded of Owen Lars and his moisture farm. It reminds me of those managing their harvests while not heeding the growing signals of the Empire’s reign.

It is very easy to find reasons not to get involved. Many have had their memory banks erased, convinced of their ways by smudging details of the Father’s past. The truth is they do not hold onto the Father’s ideals anymore. They have too much work to do.

“Don’t pay attention to that crazy old man,” he says. “You were told to forget it. That will be the end of it, it belongs to us now. Your only concern is to prepare those droids.”

Owen does indeed care. He is merely working the way he knows how, attempting to teach his hired hands the very same thing. Yet, in so doing, he denies the Father within… ignoring the destined path fast approaching. He stubbornly holds a dire strictness towards his very unstable farm.

Old Ben, though, waits patiently, knowing the time has eventually come. Will they heed his calling?

This story reminds me of the days of Yahannan (commonly known as John the Baptist). He was a voice which cried out in the wilderness, pleading with the people of Israel to make their paths straight.

When confronted by the Pharisees of his day, he said the following: “Bring forth fruits met for repentance. Think not to say within yourselves, ‘we have Abraham as our father,’ for Yah is able to take these stones to rise up children unto Abraham.”

“The axe is laid unto the root of the trees. Every tree which brings not forth good fruit is cut down and cast into the fire.”

The cry of Yahannan speaks today, just as the watchful eye of Old Ben. We have been warned. The flaming sword is being handed out, even if Owen does not allow it.