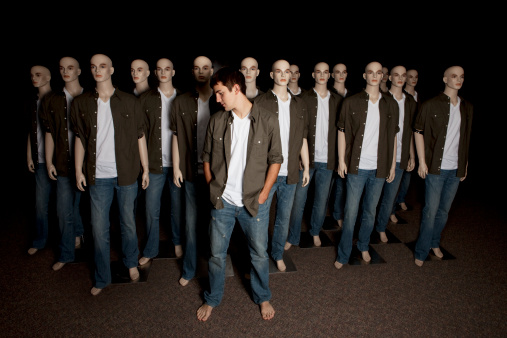 Thought of sharing observations about the future of online discussion and participation. Been noticing how, over time, community-based discussion have taken place in blanketed, regulated domains. This is a rather disturbing trend.

For instance, when this individual first came online back in the late 1990’s, discussion was much more thought-provoking and productive, while still being loosely structured.  This led its participants to further truths and realization—for its structure was primarily due to individual, personal relationship.   There was a strict focus of subjects which group members could strongly engage and learn from.

As time progressed, we eventually lost this focus. Discussions have become more of an amusement, relying on generalized conversation. We have lost the ability to muse, reconfigure, and test words that are posted—this has brought about a faltering of objection and criticism.  It has brought us to group thinking.

We are also now able to collectively vote.  Nearby dwellers, family members, and mere acquaintances are all generally labeled as friends, equally entertaining themselves in the matters at hand.  In this man’s view, the word friend is a strong word—they are as precious as gold, not a group of stars being added to your grade report.

This desire to be revered by peers has led to an overwhelming weight of peer-pressure. Critical thoughts are withheld for the betterment of one’s reputation. Sentences have to be witty, noticeable, and extremely bombastic (memes). In the end, we get something cute—yet doesn’t hold any meaningful substance.

Nowadays, commercial sites have taken a strong hold over community discussion, in which the user becomes fodder for subliminal ad attacks and in-app purchases. The global marketplaces need ever-newer sheep to be sheared.

As long as the conversations remain open and updated, the stalling-line keeps increasing. Yet where is it going? And does anyone care?

Social media, with the overwhelming variety of tools available, has led to less meaningful activity and unmindful relationships. In short, we do not realize we are being starved. Knowledge is handed to us upon a silver platter (upon demand) while the journeyman’s work ethic lays bare. There is nothing to do yet stay put and take upon this global influence.

Because of this, our hands show no hardness. Our experiences are merely downloaded from others before us—and even though our minds are molded by those who we have never heard of, we remain loyal for the sake of the scraps.

As the years go by, this person has also noticed a major attack being waged against the usage of words.  In first-world countries, we are told we have the freedom of speech—although, in reality, we are becoming more and more afraid to speak the truth.

Day by day, the truth is less and less popular—especially when we see influential people speak contrary to that truth.

Are we growing?  Perhaps we are—yet as a larger, tastier vegetable.  The substance, though, is dearly lacking.